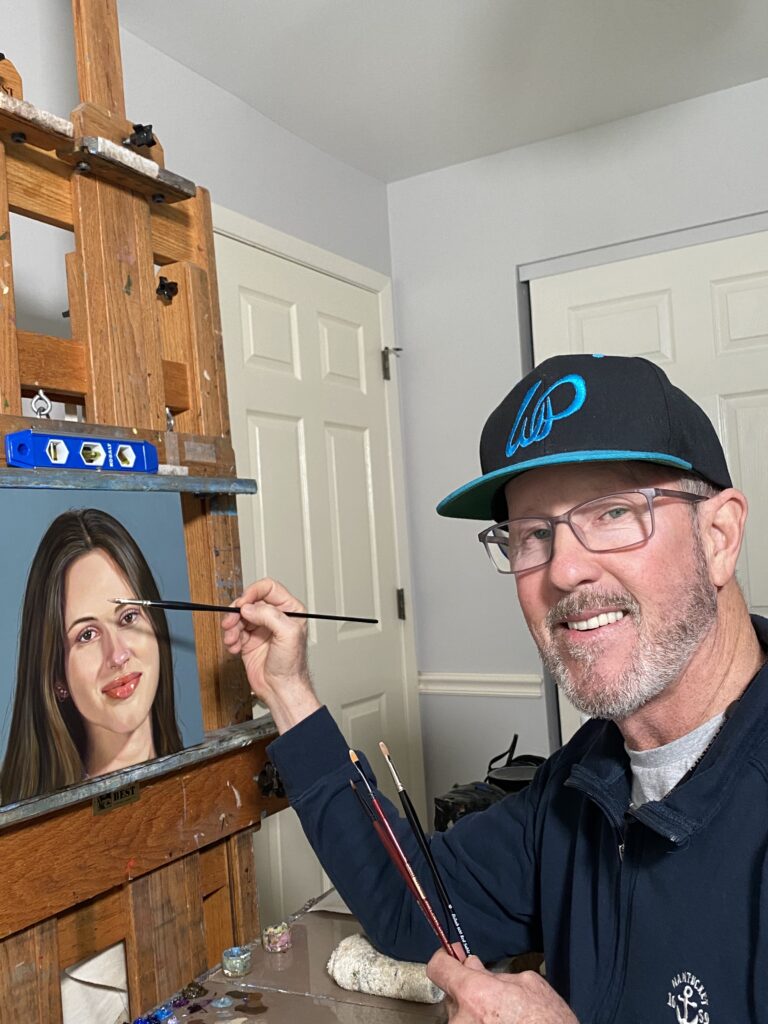 A South Florida native, it would soon be revealed that he possessed a special gift at an early age. As he matured, he continued to excel at art but never really viewed fine art as a viable career option. Upon receiving his AA at a local junior college, he chose Florida State University where he completed his education in graphic design and fine art. Shortly after, he began working as a free lance graphic designer.

In 1991 Walt was stricken with a stress related condition known as spastic dysphonia. This would lead to losing his ability to speak. After voice rest and seeing the best ENT’s in the country, Peterson was faced was faced with a ‘game changer’.  He came to the realization that it was time to defer to his God given talent.  His transition into fine art portraiture required much less talking and more time working in solitude in the studio honing his skills. His passion drove his perseverance, paired with thousands of hours crafting his technique, allowing him to develop a lifelike realistic style.

For nearly 4 years, Walt’s voice failed him and it sounded like he had bad case of laryngitis and it was painful to speak for any length of time. Then just as mysteriously as he lost it, his voice returned!  By that time, he had a handsome backlog of commissions and truly felt blessed. It was clear now, this would be his path and he was right where he was supposed to be, creating beautiful works that would bring joy and good feelings to all that see it!

In 2007 he relocated back to Boca Raton, Florida from Atlanta, to be close his family. Looking to diversify and add a little variety to his portrait work, Walt created a small body of marine art, capturing both in shore and off shore species. He was fortunate enough to be selected out of 145 worldwide submissions as one of a handful of artist to be published shortly after in the December 2009 issue of Marlin Magazine recognizing him as a formidable painter of marine art. Peterson felt honored, in so much that was his very first Sailfish painting.

Yes, over the last 25 years he’s painted a diverse selection of imagery. From celebrities to CEO’s, marine and wildlife, to sports art; and least not forget the hundreds of beautiful children he’s painted.

In 2014 he created a select body of work, focused on Equine art which thoroughly consumed him.  These were powerful works, several of which now hang in private collections in Wellington, Florida and other equine locals throughout the country. He has a strong affinity for the horse and plans on revisiting equine art in the not to distant future

One of his most memorable paintings was of the late great Clarence Clemons. Clemons was a big part of Bruce Springsteen’s East Street Band for many years. After the unveiling, Clarence told him; “That’s the finest painting ever done of me, “You captured my Soul!!”. It now hangs proudly in his son’s home. Peterson would also go on to paint a formidable image of ‘The Boss’. Upon viewing the image, Springsteen also showed a genuine appreciation for the painting.

Yes, Walt Peterson is at one with his brush, with the energy always flowing.

Where as many artist tend to find a niche and focus on it to create “a body of work”, Walt will generally do 2, 3 or 4 pieces of a particular theme and then it’s on to another subject matter that moves his soul. He’s continually looking forward to the creative process, and always looking to explore new and exciting subject matter, keeping his work fresh and alive!

Creating lifelike imagery, that moves the observer is his passion. To produce a piece of art that puts a smile on the viewers face and warms the heart, especially in todays times, is one of the reasons he picks up his brush every day. Enjoy the work of Walt Peterson, as you discover one of America’s great living artists, capturing their essence one brushstroke at a time.